Public health: how landscape can improve the health of residents

A Dutch study published in 2003 looked at the health of over 10,000 people taking into consideration the amount of green space in their environment. In places where there was more green people felt that they had better general health.

In Japan, the links between healthy urban areas and the longevity of older people were also explored in a study of the five-year survival rates of more than 3,000 people. Two environmental factors increased the probability of surviving: having walkable green space near people's homes and residents having a positive attitude to their community.

These factors were shown to increase people's longevity independent of other factors such as age, sex, marital and socio-economic status.

Work is going on across the UK to regenerate areas focusing on encouraing healthy lifestyles. In Liverpool, Plymouth and King's Cross, the landscape is being changed to improve public health and a cycleway was built through deprived neighbourhoods in the Scottish city of Motherwell to get people fitter.

When responsibility for public health moved from the NHS in England to local authorities it opened up the possibility for planning departments and public health professionals to work together and embed health and wellbeing into local policy.

It was this legislative shift that provided the impetus for a new report by the Landscape Institute on the promotion of public health across the UK. 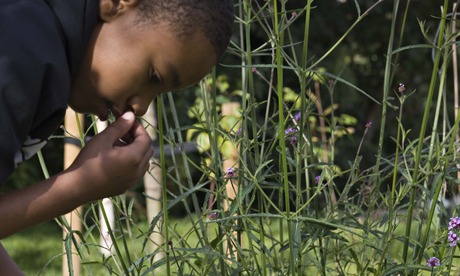 Of the areas featured in the report Dalston's Eastern Curve is a good example of what can be achieved. Here, a community-led project has turned what was once an abandoned and little known parcel of railway land into a revitalised public space.

Marie Murray, the manager of the garden, said that every neighbourhood should have a green space like this creating a sense of wellbeing. The community works together to nurture the area.

There is growing evidence that recognises planning, design and management of all landscapes should be guided as much by their importance for health as for all other functions. Even if public health is not the prime objective of a development it should be a consideration. 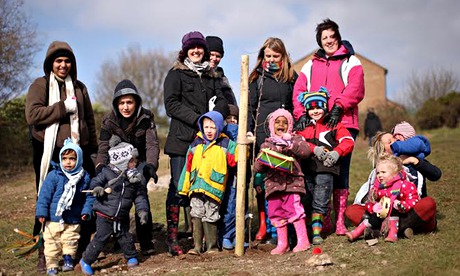 In Dalston community-led project has turned what was once an abandoned and little known parcel of railway land into a revitalised public space. Photograph: Sarah Blee/J & L Gibbons

In 2012, a review by the British Medical Association found that active travel is not only the most sustainable form of transport but has a number of health benefits. These include a reduced risk of premature death, and prevention of chronic diseases such as coronary heart disease, stroke, type-2 diabetes, dementia and cancer.

Ann Marie Connolly, director of health equity and impact at Public Health England has said that only 15% of the population in some areas uses outdoor space for exercise and, even at its highest, it's only 41 %.

Connolly believes that we need to look at how we design around simple parts of daily life such as travelling to work, going shopping and to see friends and family. If physical activity becomes part of everyday life, it's as important as supervised exercise.

Clearly, it is not only people's physical environment that affects their health and wellbeing, there are many personal, social and economic factors too. But we do know that landscape – and by that, we mean not only the wider countryside but all green and urban spaces – is important to all of them.

Studies need to be developed further but this report should engender collaboration across departments by enabling public health professionals to identify how interventions in the landscape can play an important role in delivering cost-effective improvements in health and wellbeing.

Plymouth, Devon: A four-year partnership programme hosted by Plymouth city council has used green space to improve the most deprived areas of city.

Funded by the Big Lottery as part of Natural England's Access to Nature Programme, between June 2011 and July 2012 more than 75 events were held, attended by more than 2,800 people. Across Plymouth, volunteers have been trained to lead Walking for Health Groups, while new paths and play facilities at 29-hectare Woodland Wood have increased local use and, antisocial behaviour has decreased as a result.

Liverpool: Liverpool's Natural Choices for Health and Wellbeing programme provided £300,000 of funding for projects that use local green space to improve health and wellbeing.

The city's green infrastructure strategy had identified that, while Liverpool had a wealth of green space, its distribution was unequal, with the most affluent areas having 18% more green infrastructure than deprived areas. Small grants (up to £7,500) were made available to community groups and in just 44 weeks, 38 projects were delivered employing 135 people, 867 volunteers and 100 partners to engage 3,274 participants. Some 43% of the projects were primarily focused on gardening and food growing, with 29% on creating or improving the environment.

Sue Illman is president of the Landscape Institute, which published Public Health and Landscape: Creating healthy places about how investing in landscapes can be a cost-effective way of helping to deliver the public health agenda. The full report can be downloaded at www.landscapeinstitute.org/policy/health